Posted on December 15, 2011 by scoopsontherun 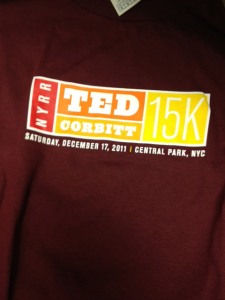 I hope to do you proud Ted. As in run the race well, not um, actually doing you. That would be weird for many reason including the fact that you're dead.

I’ve got my first “long” run for the Miami Half this weekend and I thankfully combined it with the Ted Corbitt 15k in Central Park.

I’ve only ran three 15k races before and I’m not too sure how I feel about this distance. But, as you know, I’m giving this another go. The one and only other time I ran this particular race was two years ago and it was mother fucking cold! The official starting temperature that day was 27 degrees but I think with windchill it was close to 16 degrees.

I never got comfortable during that race and that actually put me off winter races for a bit. I think I only did one winter race last year. But over the past year I have become a better winter runner and even enjoy it.

Thankfully the temp for this year’s race is supposed to be a balmy 43 degrees. I like that temperature, it’s good running weather.

I didn’t do too much running last week because I had a bit of a cold. That’s not exactly how I wanted to go into my first real training week. My goals for this race is to either PR or come close to doing so. In the three 15k races I’ve done, I’ve never done better than my first one. If I can get close to that time I’ll be happy.

I want to like the 15k distance, I really do and I’m, hoping that Teddy can help me out that.

I'm a SloHoMo.
View all posts by scoopsontherun →
This entry was posted in Half Marathons, Races, running and tagged half marathon, ING Miami Half Marathon, miami, NYRR, Running, Ted Corbit 15k. Bookmark the permalink.