I love this race. At first I thought it was just for the brief section of the course that goes through Times Square but since this was the first year that I didn’t run it, I realized that I love the whole thing. I’m not going to miss it again.

When NYRR switched this over to a lottery for entry I knew my chances of getting in would be slim. Last year I missed out on the lottery but ran as part of a charity for The Trevor Project. That was such a great experience that I swore they would be the only charity I would run for. Unfortunately, they did not put a team together for this year’s half so when I didn’t make it in through the lottery this year’s half became a no go. With everything else going on in my life that was a good thing. I’m not complaining but watching it on TV this morning made sad. 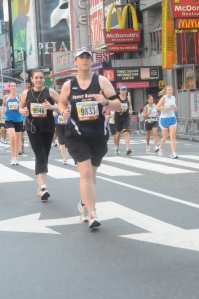 Look at me running through Times Square in 2009. I've got my game face on.

Crowds come out for this race unlike other half marathons in this city, mainly because of the marketing push of NYRR and the elite runners participating. Then of course there are the tourists walking around Times Square and just happen upon a race.

Not being able to run in a race that you love helps you realize how much you really do enjoy running. I’ve played other sports like soccer and tennis and I can honestly say there is nothing quite like the feeling you get from running. It is a sport where you really get out of it what you put in to it. Whether it’s the feeling of exertion or the sense of accomplishment at running a certain distance there is nothing better.

I’m determined not to miss the race again and will suck it up and run in the four remaining half marathons in the NYRR Half Marathon Series. This leaves Brooklyn, Bronx, Queens, and Staten Island. All but Brooklyn will be happening during marathon training so that should be fun. But it’s a fun that I’m looking forward to.