So I ran a little half marathon today.

It was pretty darn cold this morning but running gets you warm right? Well maybe six miles into it.

This was going to be a tough for me no matter what the temperature was. Three half marathons each within three weeks of each other. It’s the first time I’ve done that and the only half that got consistent training for was the first one in Miami.

It was 28 degrees at the start of the NYC Half with a field of about 14,500. There were so many people in this race that we were lapped by the elite men before we were even near the start. The elite women lapped us when we were about 20 feet from the start.

The first half of this race is the always the most technically challenging due to the hills of Central Park. Then you throw in the cold weather and things just started off slow. I was worried about going out to fast but thankfully didn’t have to worry because just about everyone was slow. 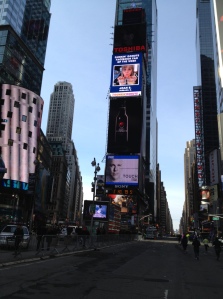 Hello Times Square, I am so happy to see you after all those hills in Central Park. (c) Stacey Cooper

It was such a relief to leave the park where the course steadily goes downhill, but that didn’t mean it was going to be easy. The wind coming off the Hudson River as we turned onto 42nd Street.

I chose not to fight that wind and do my best to conserve my energy for the straight away on the West Side Highway and I am glad I did.

I felt pretty good the whole way on this stretch and started picking off people who had either been running close to me and then others who were ahead of me. One, I even picked off right at the finish. Sorry Nicole or Nicola, I’m not too sure which name the announcer said, but I was tired of all of the TnT coaches running onto the course to talk to you.

It is always a good feeling to pick people off during the late stages of a race and I’m glad that I was able to do that and not feel dead.

This was also the first major race in the city since Hurricane Sandy and it was nice to see the support for all of the runners along the course. It was even better to give some business to local restaurants in the downtown area that are still recovering from the storm.

Overall, this was the race I expected it to be. I knew it was going to be tough and I knew I wouldn’t have a great finishing time. But I am happy with how I was able to keep a steady pace and finish strong. It’s a good measuring stick for what I need to do to get ready for half marathon number 15 — the Brooklyn Half Marathon in May.