Someone Who Believes In You

Posted on November 5, 2013 by scoopsontherun

Yes, the title of this blog post is a title of an Air Supply song. Two things I just did there: 1) I revealed my age group and 2) I solidified my dorkiness.

As all long distance runners know, when we make this commitment to run and train for a marathon we are not the only ones making that commitment. Our families and friends also make that commitment whether they want to or not. Hopefully, most of them want to.

So much of running can be a solitary sport but we cannot get there without any of the support of these individuals and being able to share our accomplishments with them is absolute joy.

This past year has been so amazing for me. I set some goals and had a panic attack (or about 25 of them), I worked hard and had fewer panic attacks, then I got faster and had a lot more panic attacks, and finally I got a new goal for my marathon from my coach and had a major panic attack. I think I set a lot of PRs in both racing and panic attacks this year. 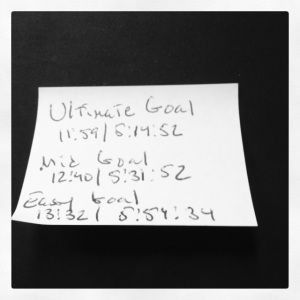 Amazingly, the few days before the marathon were good. I was able to focus and get my game face in place and stopped doubting my goals. I even, which is rare for me, told tons of people what my “A” goal was. When I began the training only one other person new what my goal was.

At one point before going into the starting corral I even said it was a beautiful day for a race. That was when the sun was shining. Then we started the race and there was wind, a lot of wind. And then it spritzed a bit, and there was more wind.

Two things I forgot to do for the race: 1) I forgot my pace band. It wasn’t a biggie, I was at least able to recreate it on my iPhone and at least remember a couple of the key times. One was for the halfway point and the other for reaching mile 24 (more on that later). 2) I forgot to turn off the auto-pause on my Garmin. This meant that whenever I slowed down significantly my Garmin paused. So I had no idea what my actual time and pace were.

Physically, I felt good for most of the race. My legs started to hurt just passed mile 20. After a brief pause to put some BioFreeze on them and stretch they were ok. Mentally, the wind was starting to take it’s toll and just about got the best of me at mile 23.

For those who may not know, the 5th Avenue portion of the race is mostly up hill. Combine that with the normal fatigue from running a marathon and strong gusts of wind. I was so tired of the wind that I was almost brought to tears by it. But I just kept thinking about mile 24. I had to get there and see my friends, one in particular who was going to make sure I felt her strength.

At that point my tunnel vision kicked in and all I could think about was just finding Doreen. When I did find her I sort of just crashed landed into her arms. She and another friend, Tara, knew I was all over the pace emotionally when I got to them. They got me moving again and ran with me for about a quarter of a mile. With their help I was able to get my focus back where it had to be and finish strong.

I PR’d by one hour and two minutes, beating my “A” goal. This was the race of a lifetime.

I didn’t just have one person who believed in me, I had a lot. They jumped on my crazy train and took the ride with me.

Completing something this challenging is incredibly rewarding but the fact that I got to share this with some wonderful people was even more rewarding.

The realization of what I have accomplished is finally beginning to sink in and I can now fully appreciate it and keep my perma-grin going for a bit. I’m going to try and ride that high for bit and spread it to a few others who can use that right now.

I’m also going to rest a bit and let my body recover. I’ve got the Miami Half coming up on February 2 but haven’t set any goals for that yet beyond having a great time. I don’t know if I’m going to do a spring marathon or not. But I am thinking sub-five hours for my next one. Come on, if I can get over a one hour PR, 12 minutes should be a piece of cake right?

But again, there is time for that. Now I get to thank everyone who supported me and I plan to PR in that too.