Posted on September 28, 2016 by scoopsontherun

Oh boy it has been a really long long time since I posted something. Thankfully, I have mostly good and upbeat running updates to give you all.

Not as consistently as I would like but I have been running and doing some races here and there. Well, more races as of late.

So let’s see about getting us all caught up on what has been happening lately.

The summer was going along at a pretty smooth pace and I had started my NYC Marathon training. The first few weeks were going well and then I had to move. This happened a little quicker than planned so I had to quickly find a new place to live, pack up the old stuff, move to the new place, unpack, and buy a shit ton of stuff for the new place. And oh by the way, I also switched departments at work. All around the same time.

The first day of this moving process started off well with me temporarily relocating to a hotel with my dog and then getting to run in the hotel in gym. Then the move took over and I did not get a chance to run for another month. Yikes!

At this point I was only able to get out for a run maybe once every couple of weeks. Slight panic about marathon training started to creep in at this point. I felt my conditioning slipping but at the same time I was completely freaking out, just the mild panic. I consider this to be a major improvement!

My hope that I could somewhat right the ship so to speak was with some upcoming races I had scheduled. I had registered for a few races to supplement my long runs and to keep them somewhat interesting. 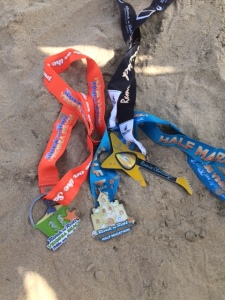 Picking up some bling for a race that got canceled and one that I ran. Thank you Virginia Beach for not disappointing! (c) Stacey Cooper

So I first headed to Virginia Beach for the Rock ‘n’ Roll Virginia Beach Half Marathon over Labor Day weekend. The plan was to do the one mile beach run on Saturday and then the Half on Sunday. Well Hurricane Hermine had other ideas and was expected to pass over Virginia Beach that weekend. Our Beach Mile was canceled due to the storm but everything was looking great for the half. In fact, we were actually going to have cool weather!

Surprisingly I wasn’t even anxious about this and was to calmly and happily finish this race. Who am I?

The course was beautiful and I felt great about completing it without too much difficulty. It was a great confidence booster and gave me some hope about my marathon “training.”

My plan was to do some actual training runs when I got back but of course that never happened.

The 5k was on Saturday and I was very restrained and focused on not working too hard. But I did have one little incident with another runner on the course. This one guy decided to be an idiot and run backwards so he could take a picture of his friend/girlfriend/wife and he ran into me from behind. He did step on the back of my leg and shook me up a bit. Thankfully I didn’t get hurt but please fellow runners, don’t be idiots and take pictures while running backwards or use those dumb selfie sticks!

A very blurry photo on the back portion of the Rock ‘n’ Roll Philly Half. Another beautiful course! (c) Stacey Cooper

The half was on Sunday and again it went well. My legs did feel a little heavy especially when we had some slight inclines to go up and for me that was more due to lack of consistent training. If I had been training consistently my legs would be more than used to the back to back days of running. My overall time was not too far off from my Virginia Beach time so again, I felt confident about the results.

I followed that up with the NYRR Bronx 10 mile race this past Sunday. Again, no training in between. This is a very, very bad pattern and I urge the rest of you not to do this!

I felt rested enough, ha, I should be considering that I didn’t run at all! I took it steady and loved the new course for this race with the finish line next to Yankee Stadium. And no disrespect to Lehman College but I was so happy that the course did not go all the way around there. That section was always so lonely and desolate that one really felt that they 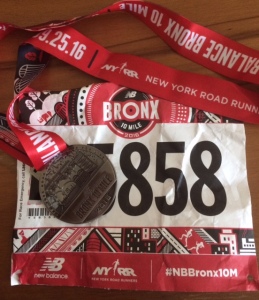 More bling! Happy to have completed this one. I’m a runner again! (c) Stacey Cooper

were no where near civilization.

This was a bit of a redemption race for me. The last time I ran this was two years ago and it was during this race that I realized that I could no longer ignore the pain in my foot. That lead me to a doctor and my severely swollen metatarsals. It took me so long to recover and get my confidence back. I can finally say that after finishing this race I really felt like a runner again.

It took a long time to get back here but I can finally say that I am back mentally and emotionally. That in itself is perhaps one of the biggest challenges there is and to conquer that is huge.

So I have completed some races and now have to actually get down to some real training. I know I can possibly salvage this year’s marathon. This weekend is my 18 mile long run followed by the Rock ‘n’ Roll Brooklyn Half the weekend after and the my 20 mile long run. This means I will only have one 20 miler under my belt but I figure if I can complete the 18 and 20 milers I can do the marathon. It won’t be pretty or for any time goals but it can be done. Considering that I missed the past two years with injuries I will consider that a great accomplishment!