A Hitch in My Giddy Up

Last week’s training went very well until I headed out for my long run on Sunday.

You see I’ve got the tendonitis thing on the top of my left foot. It started bothering at mile 17 of the 2010 NYC marathon. I have had PT and other treatments for it but the truth is that it may be a lifelong recurring injury.

It comes and goes. Last year it did not bother me at all after my first 18 mile long run which was great since that was when I was putting in all of the high mileage and you know running that darn marathon. But for the most part is that when it acts up it only does so when I walk not while I run. Conclusion — keep running. 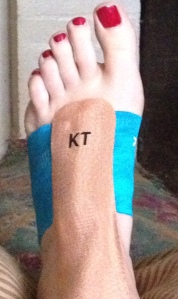 All KT Taped up and no where to go. For the time being at least.

This year it started bothering me early on. I applied the KT Tape and for the most part it was good. When I started having problems falling asleep at night and started taking Advil PM there seemed to be enough of an anti-inflammatory in that where the pain went away altogether. Yay!

About a mile and half into my long run the top of my foot started to hurt while I was running. I tried to ignore it. Tried to not put so much pressure on it but then that started to make my quads hurt. A little over three miles in I had to call it a day.

I put this one in the bad long run column, hopped on the subway, and bought some breakfast for the ride back home.

As soon as I got home I iced it, elevated it, and watched TV before settling in for a nice nap. Then I applied heat and some KT Tape. It hurt on Monday morning but started to feel better later in the day. Walking can still be somewhat painful especially when I wear not-tendonitis friendly flip flops.

I had vowed that instead of running this week I would just ride my bike every morning and give the foot a whole bunch of rest.

Well I slept in on Monday and Tuesday so no bike ride. I did ride my bike this morning and because I was feeling antsy ran this afternoon but on a treadmill and not a whole lot of miles. The good news is that the foot feels fine. But again this is just on a treadmill. If it feels good tomorrow I’ll run on the treadmill again and do the same on Friday. Again, if all is good then I’ll hit the street on Saturday and attempt my 15 mile long run on Sunday.

I’m optimistic and so anxious, in a good way, to start logging these miles again!