Now that the first recovery week is over, I’m finally getting into the meat of the training program, which I have to say, is my favorite part. It’s that part of the plan where I finally get to start adding some serious mileage and get into a nice steady rhythm of the training. 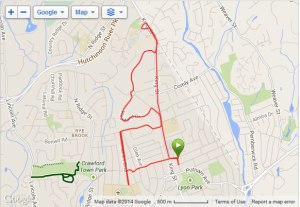 This past week included some cross-training with a nice bike ride and yes, I did that stupid yoga for runners DVD. I enjoyed the bike ride and then realized how tight my quads were right into the beginning of Hero’s Pose.

But what really made me enjoy this week was the running. For me, the first few weeks of the training plan felt as though I was just coasting along. As I looked back at those logged miles I just didn’t feel that I was putting in the proper effort. So this past week was about getting serious for this marathon.

I pushed when required and finally felt as though I found my groove with my first two-a-day or technically three-a-day workout. Because of my schedule, I’m not always able to run more than five miles before work and last year I broke these up into two runs. One in the morning and one during my lunch break. The morning one was outdoors and the lunch run was on the treadmill. I found that this really helped me in so many ways last year and I just felt that it helped my legs prepare for the miles and that my legs really liked this.

This past Wednesday was that split run. I ran better in the morning and felt even better running during lunch. It was such a huge mental boost that I surely needed. My legs felt great after both runs and that was what really mattered. I ended the day with my Deep Water Running class where I could give myself an intense but low-impact workout.

My Sunday long run took me over the George Washington Bridge and into the Palisades Interstate Park. This was my first time venturing into this part of the world and I absolutely loved it!

I had three people from my running club running with me or in close proximity so it was nice to have people to chat with and make those miles go by quickly. This helped me keep my promise to myself to keep a steady pace and push myself when I needed to. The fact that I did this on a hilly course was incredibly satisfying.

This is what scenery looks like. (c) Stacey Cooper

Then there was scenery — I actually noticed it. There is a ongoing commentary that I have with my best buddy/running wife about how when we run together I’m always very serious and focused on the task at hand. This isn’t to say that my running wife isn’t taking the run seriously but she takes some time out to enjoy the scenery. I should also point out that just because I’m all business when I’m running doesn’t mean that I’m not enjoying it.

Since my running wife has been injured I have desperately missed running with her. She’s a faster runner than I am and I know that is one of the big reasons why my race times improved so much last year. There were several times during the long run when I thought about how much she would love running here. I even took out my  headphones and just enjoyed listening to the sounds of the birds and running water. It was pure bliss and yes, there were several times when I looked up at the trees and enjoyed looking at the scenery.

But overall, this is a great feeling to have when you get into the serious part of training for the marathon. The next key part is to maintain and remember this feeling as the month of August approaches and we all get tried.